A step-by-step guide to running an open air cinema

Getting the necessary permissions

Planning and publicising the event

The day of the event

To get local residents together safely during the coronavirus pandemic and to enjoy some of the good weather.

It brings people together after months in lockdown and is something fun for the community.

Towards the middle of lockdown, people in our Big Local area of Mablethorpe, Trusthorpe and Sutton on Sea (known as Coastal Community Challenge) were getting bored of being indoors all the time. As the weather started to pick up in the summer, I decided to set up an outdoor cinema event to bring the community together in a safe, socially-distanced way. 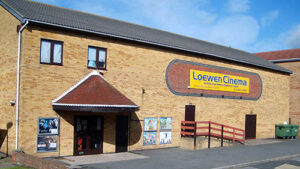 I got in touch with our local cinema, the Loewen, to see if they’d like to collaborate on the project. They’re a really community-minded cinema so were more than happy to help with the technical side of things. I then got in touch with the Playing Fields Association in Sutton-on-Sea to see if we could use their field, and Sutton Rovers Football Club, who were also very keen to help.

Getting the necessary permissions

Because the event was planned to take place on public land, we had to make sure that the correct safety precautions were in place. I had a Zoom call with 19 members of local agencies including the police, fire brigade and county council and a full risk assessment was to be completed before permission was granted to hold the event. 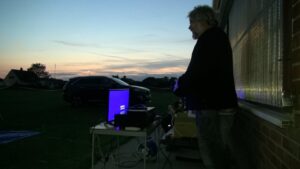 Of course, these precautions were only heightened by COVID-19, which meant I had to put together a full plan of how the event would be COVID secure. All-in-all it took four months to plan the event and get full permissions, but these are now in place for any future open-air cinema events we decide to run.

Planning and publicising the event

Once the permissions were in place, we asked for suggestions on Facebook of which film people wanted to see. We then took the most popular 12 answers and put them in a final poll – the eventual winner was The Greatest Showman. 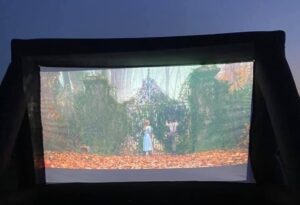 I then had one month to publicise the event. I did this through social media, posters, our community newsletter and also our local newspaper and radio stations.

We set the cost of the tickets at £3.50 per person or £10 for a family of four which we felt was affordable to most people in the area. This also enabled us to hire the film from the local cinema and hire professional marshals and health and safety stewards to be there on the day along with our own Big Local CCC volunteers. 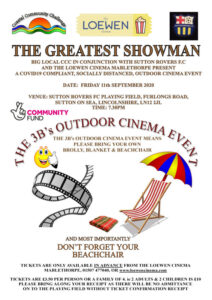 We made the outdoor cinema a ‘3B’ event, meaning ‘bring your own beach chair, brolly and blanket’. We sold the tickets online and took details of everyone attending so that we could do track-an-trace if necessary.

The day of the event

On the day of the event in September, we had a number of measures in place to make sure everyone could get as much as possible out of the experience while remaining safe. We had a station at the entrance where tickets were checked, temperatures were taken and hand sanitiser was given out. 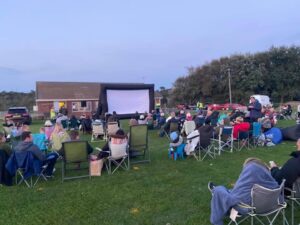 The marshals took people to their seating areas, which we had marked out using yellow spray paint to ensure two-metre distances were being kept. 138 people came along in the end, which was a fantastic turnout and made all the hard work feel worth it!

In return for hosting us free of charge, the football club were selling burgers and hotdogs from their clubhouse which people could order through their Facebook page. It was great to work in collaboration with other local organisations and businesses, and we always make sure to make these important connections and promote and thank their involvement with us. 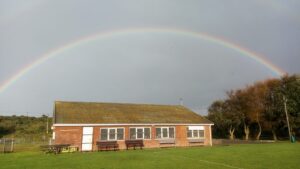 The outdoor cinema garnered really great feedback, which was brilliant after all the effort we had put in. Loads of people wanted to go again and we did have a second event planned for a week later on 18 September in Mablethorpe. Unfortunately, COVID restrictions changed before it was due to go ahead and it had to be postponed, but we’re currently planning to restart the project in Spring and throughout 2021, so watch this space!