The communities where age is no barrier

Four Big Local areas have been recognised for their age-inclusive projects as part of Greater Manchester’s Age-Friendly challenge.

Brinnington, Kirkholt, Little Hulton and Sale West have all received the Age-Friendly Neighbourhood award at a ceremony held at the end of January.

The award forms part of an initiative established by Mayor Andy Burnham – founded during the city’s Festival of Ageing in July 2018 – where he called for the voluntary and community sector, public services, and older people’s groups to submit their best age-friendly schemes and help deliver more age-friendly neighbourhoods across the region.

Burnham said, “I launched this challenge to unearth the positive work I know is going on in Greater Manchester, to find practical examples of what age-friendly really means, and to share best practice across the city-region. The response to this challenge has been fantastic.

“The variety of age-friendly work displayed from all our winners clearly shows the commitment from our local communities to make sure that people in Greater Manchester are living not just longer, but happier and healthier too.”

One example of a project that has brought together people spanning several generations within one community is the Dungeons & Dragons group in Brinnington.

It was founded four years ago by The Stockport Adventurers Guild with support from Brinnington Big Local and uses tabletop fantasy games such as Dungeons and Dragons and Warhammer to combat social anxiety and isolation. 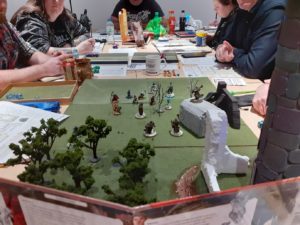 It has been so successful that health workers and social services have actively referred individuals they believe will benefit from the service.

According to Guild founder and Big Local worker Mark Mitchell, “It has been intergenerational from the start, we’ve had members as young as ten. The younger people run at problems and just hack at them with swords, while the older folk stand back and go ‘if I hit that rock, that rock will land on that panel and flip him over’. The older people try and do the minimum or stand back and think about the situation. When there is a puzzle that is where the older people shine.

“I always say ‘nobody wonders if they have left the gas on when they’re dodging dragon fire’, you can just completely forget everything.”

You can find out more about the awards in this short video.

This piece was written by Ryan Herman, our journalist-at-large. If you have a story you would like to share, please email Ryan.