When a community has more power, what happens next?

How do power dynamics play out at community level? Is power shared equally between residents, or are there subtle factors that affect who has the final say? And how are Big Local partnerships responding to these shifts in power? Local Trust’s senior researcher Lucy Terry has been leading a team working to find the answer. Here, she tells us all about the revelations from the new Power in Partnerships report.

The Big Local programme is all about community power. It shifts decision-making power to communities who have historically had less control over decisions that affect their lives, so that residents can determine how funding is spent in their local area.

But when we asked ourselves these questions we became aware of gaps in our knowledge and so commissioned the University of Kent to investigate and carry out research on power in Big Local partnerships. Their findings have provided a revealing insight into this unique programme.

Power resides in different phases of the processes involved in decision-making as well as in the final outcome.

We often think of power as about who has the final say. But this research shows it’s important to reflect on who has the time and resources to carry out the steps that form the early part of the decision-making process.

Seemingly small activities such as informal phone calls and messages, gathering information, or drawing up a meeting agenda can all contribute to what decisions are discussed, when and by who.

For example, if a small group of partnership members discuss on WhatsApp what time to have a partnership meeting, they would have already made a small decision which affects the decision-making process. People with more time to spend on those informal conversations, or those who are paid for their time, may have more of an influence on the multiple invisible steps that lead to the ‘final vote’.

When we had this [meeting] without an agenda […]people who didn’t normally speak felt less intimidated. If you have this agenda structure it will exclude some people who are not so familiar with it.

The research revealed that structures, like meeting agendas, chairs and minutes, which are put in place to help decision making can actually hinder some group members from participating. People who are not used to formal meeting formats, or who may be quieter, might be discouraged from speaking up.

One Big Local area resident said that sometimes they found a ‘free space’ meeting with no agenda could be really effective, resulting in livelier discussions and encouraging those who tended to be quiet in meetings to have their say. Of course, things like agendas and minutes help get things done. But it is worth considering where practices are taken–for–granted and not questioned, and when to review these processes.

Can meetings happen in different ways? Can someone else take a turn at chairing the meeting?

It is also vital to reflect on which groups are and are not represented in decision-making. In much the same way as the private and public sectors, communities are considering how to include people from marginalised groups who may be under-represented in situations where decisions are made.

We know from our partnership members’ survey that Big Local partnerships want to address this. The report highlights some suggestions which came from areas themselves (you can find them all in the recommendations section). These include:

As the report highlights , being mindful of these points is the first step. It’s important to reflect on and be aware of power, and who is and isn’t included, in order to help the Big Local programme become even more community-led than it is already. 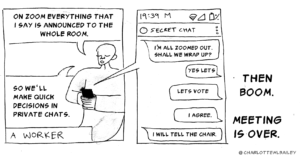 As more and more Big Local areas consider their legacy, supporting resident decision-making remains as important to the Big Local programme as ever. And as communities move back to in-person meetings in some cases (while also continuing to use platforms like Zoom) it’s a good opportunity to think about  how power resides in the different processes and structures used to make decisions.

To discover more findings and recommendations you can download the full report here. Or for the shorter summary version, click here.

The images in this blog come from a new comic, released to celebrate the report findings and explore these themes in a light-hearted, engaging way. Have a look and get in touch to let us know what you think.