Long crisis scenarios: how can we shape the future?

Following the release of The Long Crisis Scenarios last month, James Goodman, director of partnerships at Local Trust, considers how communities, individuals and organisations can use these scenarios to plan ahead and begin shaping their role in a post-COVID world.

A friend in a grant-making foundation said to me the other day, “COVID-19 has definitely lengthened the view. We’re asking all the time, what can we do now that will be useful for the next ten years?” Another said to me that there’s a growing recognition that short-term grant-making in the past has destabilised communities and made them less able to respond effectively to this crisis.

If the pandemic has pushed us to think more long-term, that’s a clear silver-lining. 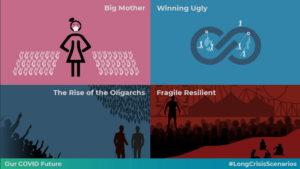 The Long Crisis Scenarios report is part of Local Trust’s contribution. Developed with the Long Crisis Network, it sets out four different futures that seem possible from where we’re standing now: a ‘Big Mother’ suffocating state, a ‘Rise of the Oligarchs’ takeover, a ‘Fragile Resilient’ world of perpetual crisis and informal action, and a ‘Winning Ugly’ collective effort to transform.

We discussed the scenarios in a webinar attended by a hundred people, mostly involved in Big Local partnerships or other community action, from across the UK and beyond. When we asked everyone to vote for the scenario that they thought looked most likely at the moment, people were split pretty evenly.

This (admittedly unscientific) result underlines just how deep the uncertainty is about the future at the moment. It genuinely feels like any of these radically different scenarios could be the future. Unprecedented levels of government intervention point us towards Big Mother.

A coming together and forging of new relationships, particularly between the local state and community organisations, suggests Winning Ugly might be in prospect.

The tragically unequal impacts of the virus on more deprived areas and BAME communities is perhaps a sign of a Fragile Resilient future. And the response of populist leaders around the world, from Brazil to Belarus, might convince us that the Rise of the Oligarchs is coming our way.

we’ve seen a huge street-level and neighbourhood response. It feels like it could be an opportunity to shift power closer to the local community, given the increase in civic participation”.

And we learned from Pat Kane and Indra Adnan of The Alternative UK that the grassroots activists they work with in Plymouth see their role as pushing their city towards a ‘Winning Ugly’ type scenario, driving positive change from the grassroots, building connections between communities. Perhaps the post-COVID settlement can be defined by the actions of our newly galvanised local communities?

The real point of writing scenarios like these is not to be able to say I told you so in five years’ time. It’s to help people think and plan better.

Scenarios become useful when they are adopted as practical tools, when a wide range of people are talking about them, exploring implications, preparing strategies and ideas, developing partnership and plans – asking ‘so what’?

You can do this alone but it’s much better to discuss in small groups. If you’re a member of a Big Local partnership, it could be the focus for a different sort of partnership meeting. Or you could try inviting others into the conversation, such as young people, local business people or a number of different organisations working in the same community, for a shared conversation about the future. It can be enlightening or even surprising to find out people’s assumptions about the future and what they feel is important.

When you have discussed all the scenarios, take a step back and ask:

You could spend a lot of time on this – and start to develop a positive vision for your community in the post-COVID world and strategies to get there – or you could do it in a very light touch way, perhaps at the start of a meeting, asking people what they have noticed recently that might fit neatly into one or other of the scenarios.

At Local Trust we’re keen to have these conversations, and explore how we can work with partners to drive positive change for local communities. So do drop us a line if you’re interested in talking more.