Around 20,000 people should have been lining the streets of Whitley Bay this weekend for its annual carnival. Here, our journalist-at-large Ryan Herman speaks to a local resident about the new plans in light of COVID-19.

The event has played an important role in what has become an upwardly mobile area and a model for northern seaside towns seeking to reverse their fortunes. 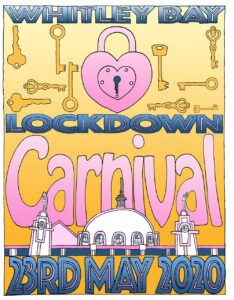 But when Whitey Bay Big Local (WBBL) in Tyne and Wear began eight years ago, it was at a stage when the town’s regeneration programme was only just starting to take effect, having become known as one those places where people used to go to, where nothing interesting happened anymore and everything felt grey, even on a sunny day.

“Whitley Bay Big Local spoke to people about what they would like and one of the suggestions that kept coming back was to restore the carnival that stopped in 1984,” says Carol Alevroyianni, a founding member of WBBL and an instrumental figure in the carnival’s revival.

Attendance figures have mushroomed from 2,000 for the carnival’s return in 2014 to 17,000 last year. But COVID-19 resulted in the organisers announcing on March 17 that it would have to be postponed until next year. 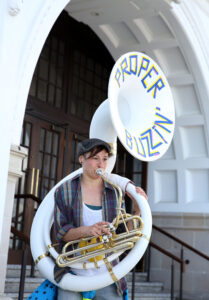 What enabled them to rethink and reinvent it as the ‘Whitley Bay Lockdown Carnival’ was the introduction of the Creative Civic Change (CCC) programme – which works with 15 communities around the country to make their neighbourhood a better place to live – coupled with the response from the local community.

Creative Civic Change is a partnership between Local Trust, the National Lottery Community Fund, the Calouste Gulbenkian Foundation, and the Esmée Fairbairn Foundation. The programme was launched in May 2019 and supports fourteen communities across England, including Whitley Bay, to use the power of the arts and creativity to create meaningful civic change in their areas.

Whitley Bay CCC has used the event as the platform for a year-round programme of activities that covers arts development, grants for the public to develop their own ideas and activities that feed into the carnival itself.

“It’s been like going on a journey without a map. But people really want it to happen this year. Instead of dressing up for the parade we hope families will make their own carnival costumes, decorate their places and try some of the dance, music and the rap challenge and of course share their efforts with us on video.”

The streets will be lined with Mexican bunting, originally intended for a giant marquee which is usually the venue for the carnival art market and Carnival Ball. 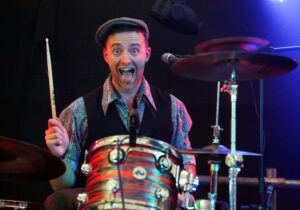 The ‘Socially Distancing Disco’ truck will bang out tunes as it goes from street to street (nobody has been told when or where it will appear) followed by artists in extravagant costumes who will also adhere to social distancing, of course.

The Nordestinos Project has brought together drummers from three groups – Jack Drum Arts, DrumDin and Whitley Bay Big Noise Drummers – who were due to give a premiere performance on the day. 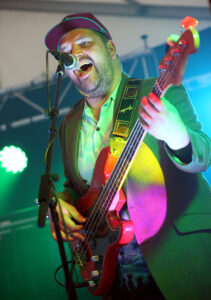 Instead, the premiere will be a multi screen video filmed in participants homes and a video has been made by Big Noise to help people join in with one of their songs which is a traditional North-East tune reworked with samba rhythms.

The Art Market will now become @lockdownmarket on Instagram and will showcase works by artists and makers that would have otherwise been on display in Whitley Bay.

It is hoped that people will share content with friends from anywhere in the world, and will open it up to a new audience.

For Carol, the return of the carnival was about being in the right place at the wrong time.

“I moved back here nine years ago to be close to my mum who was ill and subsequently passed away.

There were a lot of boarded-up shops, absentee landlords, derelict properties on the seafront. All the news coming out of Whitley Bay tended to be negative.

“I wanted to get involved with something in the area and I wanted to create work for myself as well as other creative people here.” 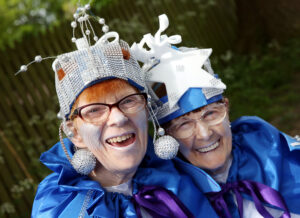 She had experience of staging street festivals and stood down from the WBBL board so she could pitch to run the carnival and in 2017 set up SALTo Arts Productions with co-director Richard Broderick to deliver the carnival and other community arts events.

WBBL supported the first event (and every one since), which was centered around the Spanish City, a local landmark that had become a symbol of Whitley Bay’s decline. 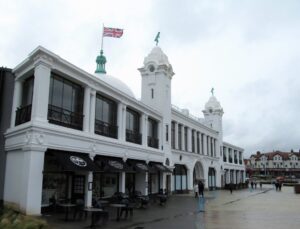 So-called because of its Spanish-style awnings, this magnificent Edwardian Grade-ll listed building was once home to fairground attractions, and was the inspiration behind in the Dire Straits song ‘Tunnel of Love’, but had been empty since 1990.

“One of the other board members did a local history exhibition about the Spanish City (left). So we knew people would want to have a look around before it would be closed for redevelopment.

“Myself, Sarah Sutton who is now a Big Local worker, and Annie Sheridan put it together on a shoestring budget.

“Through word of mouth it has grown year on year.  When you’ve been in a parade, when you’ve made an outfit, when you become part of the event, then that’s the best advocacy you can get.

“For me, one of the great things about the carnival is seeing a fairly middle-class family chatting to a homeless person because they are not wary of each other because they both played drums together or made costumes together.

“Not only has it attracted people from outside Whitley Bay but they keep coming back throughout the summer. And had it gone ahead this year we would have brought in around £100,000 through a mix of arts grants, local business sponsorship, and commercial trade at the event.

“Local residents have gone from taking an interest in what we’re doing to becoming actively involved. What’s really interesting is how it has transformed people’s lives.

“Sarah (Sutton) – pictured below – has created workshops, she’s joined a band, she’s one of the artists we now employ. That wouldn’t have happened were it not for Big Local engaging with the community. “During the time we’ve been building the carnival, we’ve been part of creating a new story for Whitley Bay. Alongside that, there has been a lot of renovation and regeneration.”

She adds, “Who knows what is going to happen on the day but, if nothing else, Whitley Bay is going to be covered in loads of Mexican bunting!” 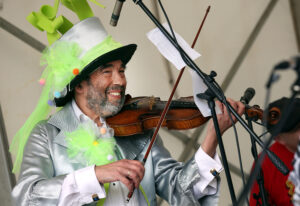 Carol is understandably concerned about the impact COVID-19 will have on what had become a thriving local economy supported by a local authority that was willing to put creativity at the heart of its agenda.

“They paid an artist in residence to be involved in the colour schemes of local buildings. There had been a lot of talk around the colours of Whitley Bay and some people said ‘when I was a kid you knew you were in Whitley Bay because of the red granite chippings in the roads. All the street furniture was pale blue.” 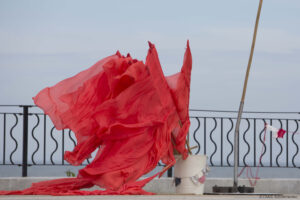 Carol adds, “Whitley Bay Big Local has been part of that conversation, working with a landscape artist and the local council and it has made a huge difference. The promenade and furniture are pale blue again. It doesn’t sound like much but I’m on the border and you see that difference between the black and the blue which blends with the sea and sky.

We’ve gone from looking like a second rate city to a vibrant town.”

Another concern is that the first casualty of a recession will be the arts.

However, the revival of seaside towns like Margate, Hastings and Whitley Bay demonstrate that art should not be viewed as a ‘nice thing to have’ but an essential tool in rebuilding local economies and maintaining community spirit in the aftermath of this crisis.