Building wealth from the grassroots – one year’s progress

To mark the publication of the learning report from our community wealth building tour of England in 2019, Rob Day, policy and parliamentary officer at Local Trust, explores the work the communities we visited have been doing to build wealth in their areas over the last year.

Back in November 2019, in the midst of a general election campaign, Local Trust welcomed Ted Howard, co-founder of The Democracy Collaborative and pioneer of the community wealth building (CWB) movement in the USA, to England for a week-long tour exploring CWB at a neighbourhood level.

Throughout the week, the touring party visited community groups in Dover, Morecambe, Manchester, Leeds and Leicester to see their solutions to an economic system that has not been working for residents in their neighbourhoods for many years.

Much of the CWB activity in the UK to date has centred around the activity of local authorities and the public sector. This tour highlighted the value that community-led activity can bring to the movement, and the crucial role that residents must play in building a new more equitable future.

It was clear from our tour that, if these community groups were to shift the dial in the local economy, community-led activity would need to be connected to the larger public and private actors in each locality.

While many of the projects that we visited were significantly improving prospects for residents in their local area, most were struggling to impact upon the wider economic ecosystem in which they were operating. It was clear that, if these community groups were to shift the dial in the local economy, community-led activity would need to be connected to the larger public and private actors in each locality.

To mark the publication of the learning report, and the one-year anniversary of the tour itself, we got back in touch with the groups we visited to see how they’ve adapted to the events of the past year, and what they have planned for the future.

The closest resemblance of a whole-systems approach to CWB that we saw was in Dover. Community groups, centred around Dover Big Local and the Co-Innovation Space, were looking at how to regenerate the high street and maximise returns on local tourism, while also beginning to work alongside the local technical college, the port and the local council to ensure as much wealth as possible stayed in the local economy.

These relationships have become solidified throughout the COVID-19 pandemic. In March, Dover Big Local set up Together 4 Dover, a group with a recognised brand around which community groups, the district council and local businesses could share knowledge and resources, coming together to protect those most in need. It has in essence become the anchor for community support over the past eight months.

Morecambe was one of the few places we visited where residents spoke openly about the need to transform the entire local economic system, which had suffered from a sharp decline in the tourist trade, poor job opportunities and the threat of gentrification from out-of-town investors.

Beki Melrose and Jo Bambrough, co-directors of The Exchange CIC who hosted us in Morecambe, said that the opportunity to take part in the tour “was hugely reassuring to us to know we aren’t on our own on this journey and [to] discover other projects and places that have persevered and achieved remarkable things.” 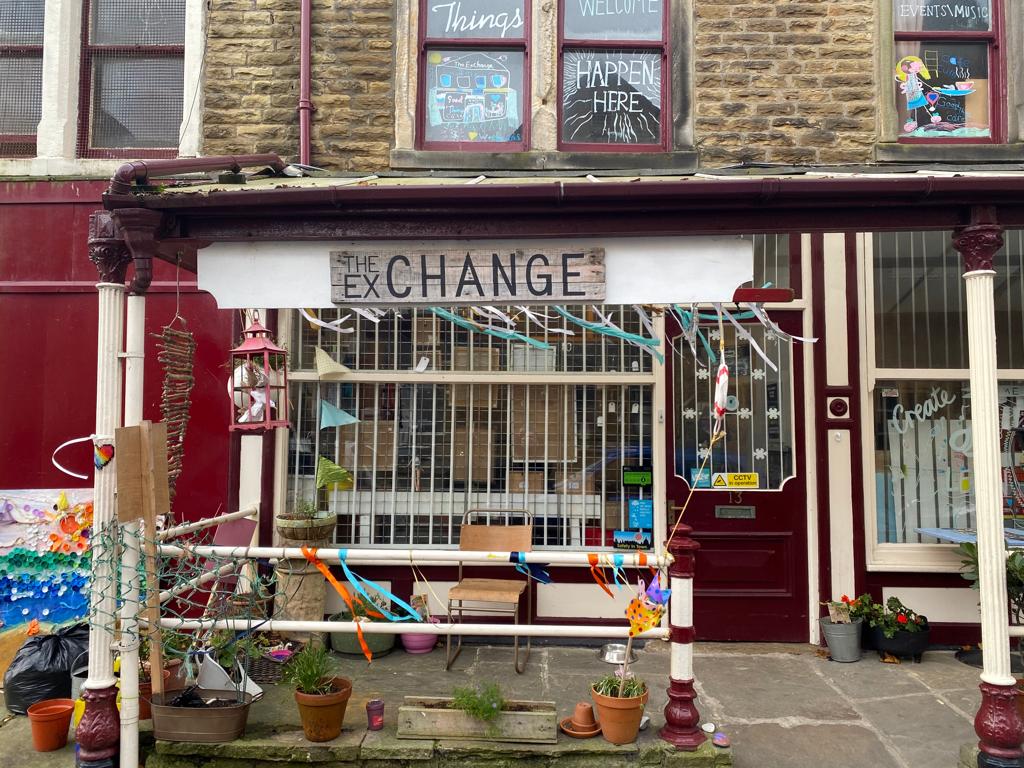 Since last November, a pilot programme has been set up, funded by the same group that funded the learning tour, whereby The Exchange CIC will investigate how residents might use CWB principles to drive wholesale economic change across Morecambe. Although COVID-19 has thrown many of their plans off course, Beki and Jo hope to bring together the entire community – residents, the council and local business – over the next year to co-design a manifesto that will “form a roadmap for change” across Morecambe.

Such work could represent a watershed moment for CWB in England, setting out a new methodology by which the local community can synthesise the powers of the public, private and voluntary sectors to build local wealth from the grassroots, rather than relying on traditional methods of economic regeneration.

We visited two projects in Leeds: the Chapeltown Cohousing (ChaCo) project and Heart, which was run by the Headingley Development Trust (HDT). Both set clear examples of how communities are often forced to use inventive workarounds to traverse state bureaucracy.

ChaCo has been 10 years in the making, and when we visited the foundations had just gone in. Bill Phelps, one of the founding members of the cooperative, said that the last year has seen the same intermittent progress that have become commonplace for the development over the past decade. Recently, they have had to delay the build due to “heavy rain, a very sluggish council highways department, COVID-19 and corresponding holdups in the supply chain.”

Nevertheless, ChaCo was always about turning a pipedream into a liveable reality, and it will be done! Bill said that they have managed to rope in some excellent professional support, their funders are still backing them and none of the cohousing members have pulled out. If all goes to plan, they should be moved in by the end of 2021. As Bill notes: “the end is in sight!”.

Heart, the community hub run by HDT, was gifted to them as part of a community asset transfer (CAT) and required £100k in renovations before it could open. HDT set up a community shares scheme to finance it, and it has been incredibly successful. Leading up to the outbreak of COVID-19, and during the summer easing of lockdown, Bill says Heart enjoyed incredible turnover and “was performing at the highest level in its history”.

During the pandemic, Heart has been able to strengthen its brand and bring the community together. It ran a takeaway service and, later, “bubble meals”, where households could eat together outside. It furloughed almost all its staff (on 100 per cent pay) where they volunteered at the community greengrocers, helping to get the delivery service up and running.

HDT are in a position to think strategically about the future, even as that future looks increasingly uncertain. They have identified several themes around which they are planning to build on their work over the next few months: 15-minute neighbourhoods, green space (or the lack of it), environmental sustainability and quality, and mutuality.

They are keen to get back to meeting in person. Linda Mills, who hosted us at Heart, stated: “the hunger for social interaction has not gone away. Rather, there is a longing for the ‘right kind’ of human contact, and that is precisely what drives us to have hope”.

B-Inspired operates as a self-sustaining community anchor, building their own wealth through the Business Box – a managed workspace that also offers virtual office services (providing mail delivery and meeting room facilities for businesses that do not need to rent physical office space). Since March, the Business Box has only lost six of 52 tenants (and these have subsequently been replaced by five new ones), while the virtual office space and flexible leases mean that B-Inspired feel, in CEO Angie Wright’s words, “cautiously optimistic” for the future.

When we visited last year, B-Inspired had recently completed developments on the former youth centre, given to them as part of a CAT, which had been “left languishing with no services and a leaky roof”. During November and December 2019, the building was transformed into the Grove Community Hub, now proudly housing a new community café and social bar space, along with a top-class dance and fitness studio, training suite and several artificial and real-grass football pitches. 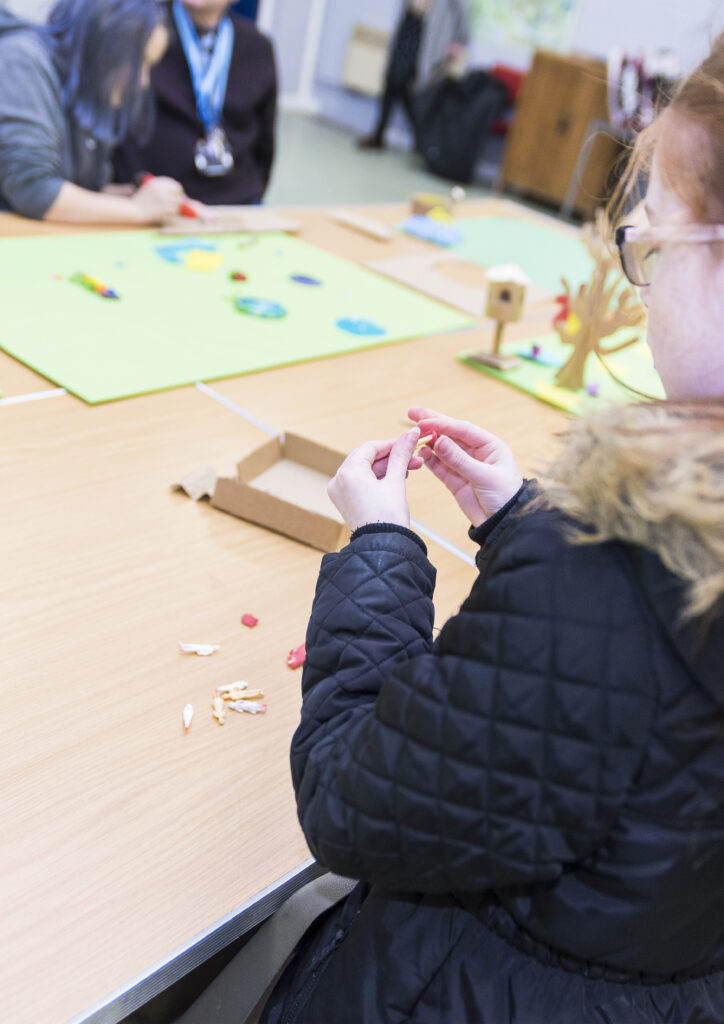 Due to COVID 19, B-Inspired had to close the Grove Community Hub and have seen a 37 per cent rise in foodbank usage. On an estate with over 16,000 residents and absolutely no community space except that provided by B-Inspired, Angie is determined that the Grove Community Hub should be back up and running as soon as possible to support the community. Angie says they are “forging ahead with setting up the café, shop and bar and hope to have them all launched by next spring.

What’s next for CWB

It is clear from both the tour and the activity that has taken place in these communities since that, in order to be successful, community wealth building needs to be rooted at a neighbourhood-level, and that this activity is already going on across the country. To date, the movement in the UK has been too focused on local authority procurement practices and often overlooked the power that communities can have to change their localities. We must seek to embolden residents like Bill in Chapeltown to think about new ways of living, or Jo and Beki in Morecambe to find ways to regenerate their hometown without relying on loans from large firms. This is the only way for CWB to have the legitimacy and flexibility to work for all communities across the country.

In order to transform our economy, CWB must first put power in the hands of local people.

Communities cannot do this alone. Often, groups we visited on the tour noted that it felt like they were, as Beki Melrose put it, “swimming against the tide”. If community-level activity is to have the type of systems-change needed to improve prosperity in the most deprived communities, CWB activity must connect community actors with larger public and private sector organisations that can leverage in greater wealth.

Unless it is driven from the grassroots and connected to actors across the wider economy, CWB risks becoming just another think-tank slogan for top-down regeneration. If it wants to transform our economy, CWB must first put power in the hands of local people.