Barrowcliff opens their new park to the community – a great success.

3.45am on Saturday 23 May saw me heading out of London to Barrowcliff in Scarborough for the opening of their park. I’d been invited to attend by Roy, the chair of their Big Local partnership after having a conversation at our spring event in York and seeing photos of their plans, including the designs by young people for the park with their Wizard of Oz theme.

The park opening was timed for 10am on the Saturday of the bank holiday weekend, hence the early start! Arriving in Scarborough I had a drive along the sea front before going to the Big Local area. The children’s centre opposite the park was open and offered a welcome cup of tea as crowds started to gather at the gates of the park.

Just after 10am the park was opened to a countdown of 5-4-3-2-1 and the ribbon being cut by the oldest resident in the area Mrs Ida Osborne joined by her great granddaughter Miss Millie Salt. Then the children were allowed in and the adults stood aside. Within minutes the park was full. There are five areas – for young children, for older children, an all-weather ball court and a community space – though the grass seeds still need to grow. The path will soon become the yellow brick road! 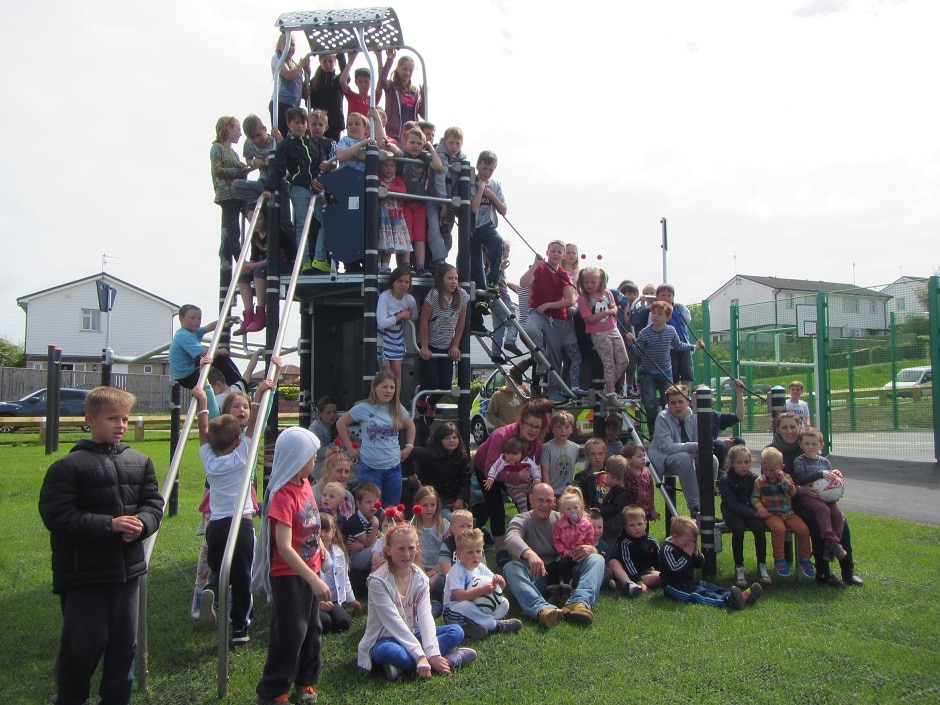 The park has been funded primarily by Big Local funding, as well as by generous contributions from Scarborough Borough Council, Yorkshire Coast Homes, the North Yorkshire Police and Crime Commissioner’s Community Fund and the locally trusted organisation; Groundwork North Yorkshire which has been key in developing the park.

Scarborough TV news were interviewing everyone to capture the opening, having recorded the progress in video.

The mayor attended the opening, the local MP visited, lots and lots of children, young people and their families used the park and by the end of the morning Roy as chair of the Big Local partnership and Bill, the vice chair, were pleased with their work and that of the others who helped them. They’re now identifying their next task and willing to share their experiences with other Big Local areas. You can get in touch with them through their support worker at Kerry.Lee@scarborough.gov.uk

The Big Local rep, David Burnby explained that this has been a challenging project. Previous regeneration initiatives in the area had created tensions on the estate and when Big Local was first introduced, residents were sceptical about being able to choose their priorities and have the money to fund them. The park project has however united the estate, on a site almost in the middle of Barrowcliff which is accessible to a broad range of children and young people of all ages. It was heartening to see so many people turn out for the opening and see the community’s approval of the project. It was prioritised by people locally, designed by them (including children) and will now be enjoyed by them.

During my visit I also met two Star People, one who initiated the asset transfer of woodland into the community and is embarking on a range of activities using the woodland, including setting up some apprenticeship training. The other is turning her skills in craft into a social enterprise and is working with a range of people to make that happen. Both have been supported by UnLtd, our partner on the Star People programme which supports social entrepreneurs.

It was great to see Big Local in action and to meet so many enthusiastic people making a difference in their community. I have also heard from Roy, that over a week later, whatever the weather, the park has been busy with children every day, and no less than 75 at a time!