The power of small local enterprise

Rachella Sinclair from Noel Park Big Local area felt strongly that her community deserved better than the value and chain shops of the local high road; that there should be opportunity for a local economy run by and for local people.

She started Noel Park Market in 2012 with a Star People award from UnLtd – which backs people in Big Local areas with money and support to create sustainable solutions to tackle social issues.

Four years on, many of the people who have been involved in holding stalls or volunteering at the market have since gone on to create their own social ventures – supported by Rachella and UnLtd.

The challenge: putting community into shopping

I live in Wood Green, in North London. Our high road has the second highest footfall in London after Oxford Street and like Oxford Street, the high road is dominated by chains. However, our multiples are quite different. Retailers call Wood Green a “value market”.

Shops sell throwaway fashion and the low-end of what they sell nationwide. Even the grocery chains focus on lower-priced, lower quality items. Betting shops, casinos and their related payday moneylenders also dominate the high road. Many of my neighbours don’t even go to the high road, even though Noel Park butts up against it. They prefer to jump on the tube and go elsewhere, instead.

I wanted to bring a sense of community back into shopping. I wanted a place where neighbours could meet each other and could buy locally produced products or farm fresh produce directly from the people who grow it. I thought a market would be a great way to do that while providing opportunity for local people to start their own market-stall based business.

While I wanted this market in my neighbourhood, I didn’t start out wanting to do it myself. I approached a few of the chain markets who operate in London to see if there was any interest. They didn’t really give me the time of day. After that I thought: “Well I’ll do it myself”.

Noel Park Market started in the school yard of Noel Park School in 2012. We were there every Sunday. The great thing about it being a community market is that it became known as a place people could come and meet each other. If there was an issue in the neighbourhood they would come and talk about it.

For some people it was a chance to get a coffee and talk to people. Several elderly people would come and sit on the benches every week and just talk to their neighbours. Some just sat and took in the surroundings. It felt like people were creating connections with their neighbours rather than just going to work during the day, and then coming home and closing the doors.

Unfortunately, when redevelopment of the high road started, the work blocked half of our shoppers from coming to the market. There wasn’t the critical mass of people to keep it going in that location.

We started again with a Christmas market in 2015. Local residents had booths side-by-side with artists, farmers from Kent and stalls selling Christmas trees, gifts, food and upcycled clothing. The Passion Project, a social enterprise that works with youth offenders, kept shoppers entertained with music all day. It was amazing in terms of footfall – instead of a couple of hundred visitors we had a couple of thousand. It gave us something to build back from. “The market is still looking for a permanent location to trade weekly, but in the meantime is operating as a pop up at every chance offered. 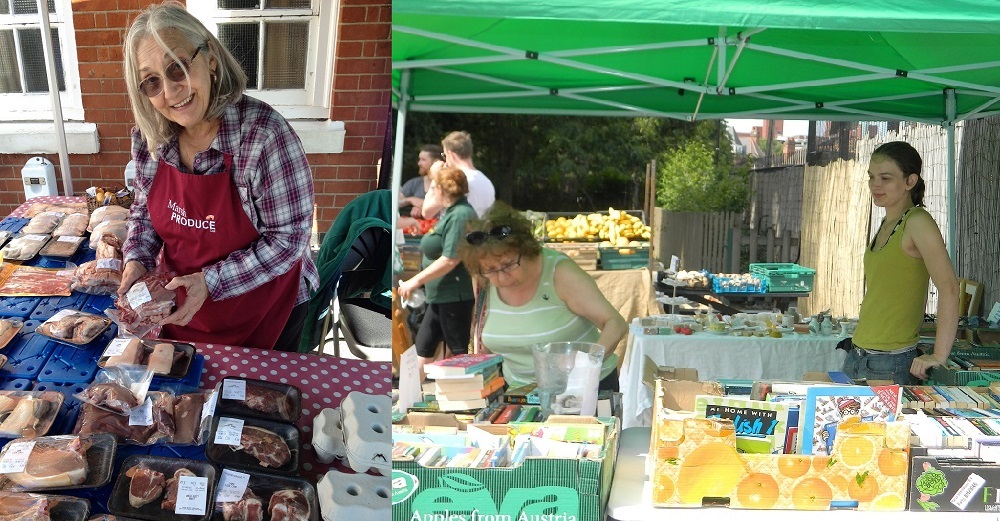 I love Noel Park. I’ve lived many places in my life, not just in this country, and this is the friendliest. I know most of my neighbours. There’s a community and sense of character here. We’ve got the traditional English housing and community but over the top of that we’ve got this wonderful diversity of different cultures coming together.

Because of the neighbourhood’s great diversity, and because it’s a slightly poorer area, it has been a challenge getting the critical mass behind the market. Some neighbours have told me they don’t like “farmers markets” because they’re too expensive or middle class, but it’s not. I want to spread the word that eating well, eating locally eating sustainably doesn’t have to be an elitist thing. Everyone should be able to shop and eat this way.

One local enterprise can create another…

For me the market is a good way for people to try something out without needing that high amount of money to start a shop, which is beyond the financial means of many.

I believe that if you truly want to look at and address the issues of unemployment, debt, payday moneylenders and child poverty, if you want to help train people and replace despair with hope, it’s a good start to try to create an environment for small local enterprise.

One of the ventures I started on the back of the market is the Backyard Farmers Collective. I had difficulty in getting farmers to sell up a stall every consistently every week. Most preferred the higher footfall of the more established London markets and would come a few times before leaving for the chain markets that operated over multiple locations.

So I went knocking on doors in the neighbourhood to find gardeners and invited them to join the Backyard Farmers Collective: Local gardeners selling produce- often dug out of the ground that morning- to their neighbours.

Getting people involved has led to other projects happening that are great for the area. One of the farmers from the collective has since gone on to get Star People funding to transform a local park with an intergenerational gardening club. He then recruited a local mum, she has just started a social enterprise running youth football in the park. Then she recruited another. The park used to be seen as a no-go zone and now it’s full of activity. It shows the transformative effect that backing a couple of people can have on an area.

I started out wanting to create an alternative to the high road, something nice for people in the neighbourhood to be proud of. What’s actually happened has gone so much further than that, things that I’d never have imagined. That’s the most amazing thing for me.

Rachella was supported to develop Noel Park Market through the Star People programme, delivered by UnLtd on behalf of Local Trust.

Star People gives cash awards and support to people who want to try out, develop or grow an entrepreneurial solution to a social issue in their Big Local area.

UnLtd focus on people first, working to help them develop the skills they need to make a positive impact locally.